JR Solonche is a man of literature. He expresses his love of literature with many forms, more than I can say I know. Read this wonderful verse in Offcourse, penned out of simple love.

One of my favorites posted here; go to the link to read the other four.

(After an Anonymous Chinese Poem)

A handful of clay
and a birch twig
for a handle.

Be grateful
for whatever
falls in.

Look.
These words
are first.

Five-time Pushcart as well as Best of the Net nominee, J.R. Solonche has been publishing poetry in magazines and anthologies since the early 70s. He is coauthor of Peach Girl: Poems for a Chinese Daughter (Grayson Books) and author of Beautiful Day(Deerbrook Editions) and Heart’s Content (Five Oaks Press). He lives in New York’s Hudson Valley with his wife, the poet Joan I. Siegel and nine cats, at least three of whom are poets.
His work has appeared frequently in Offcourse. 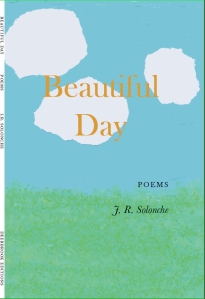